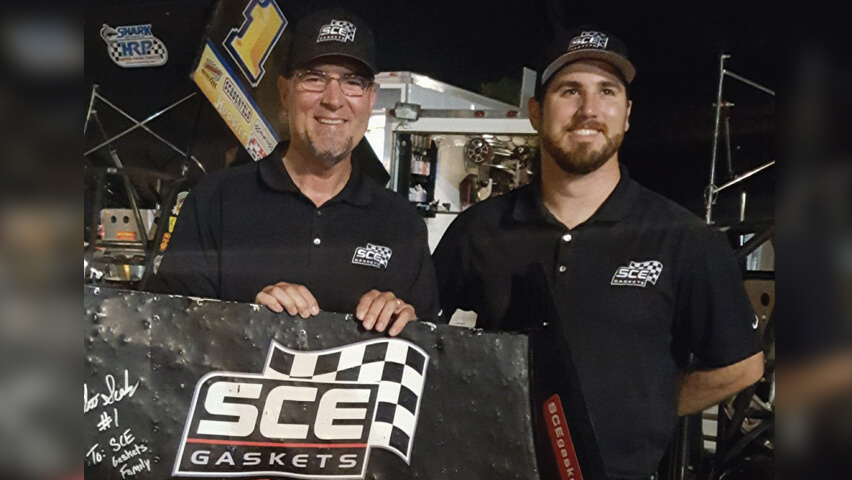 “Our job as manufacturers is to solve your problem. If you’re complaining about something, it’s my job to fix it, because you as the customer have the right to request everything.”

Ryan Hunter seems to be purpose-built for the performance industry. We’ve heard this so often but it’s just the fiber of our industry. For Hunter and his family-owned company, SCE Gaskets, it really all starts in 1990 in his dad’s garage. There are some pictures on the wall that give you a clear indication that they’ve always been car people, destined to leave a mark on the industry.

Drag Illustrated sat down with Hunter at SCE Gaskets’ new facility in Mount Pleasant, Tennessee, to discuss the company’s history and what comes next for the family-owned gasket manufacturer.

Where did this all start?
It all began with my grandfather, who made side money during Prohibition by modifying cars for bootleggers. From there, the car guy thing was a part of our family heritage. My dad’s first car was a ‘32 Plymouth coupe that he bought for a few bucks, got the engine running and drove it to high school. Then, like so many others from that era, Dad horse-traded up with dozens of other cars. He just started wrenching on crap and from there all three of us brothers picked it up. I’m the middle child – all of us got our hands dirty and still to this day we each have car projects going.

How did you get started in manufacturing?
All through high school I pretty much followed my dad’s leading and horse-traded cars. I had some junk and some nice stuff but my ’65 Malibu SS got me hooked on the drag race thing. I fiddled with my stuff, wrenched a bit on a NASCAR Winston West team, wrenched on a Top Fuel dragster team and various others.

Then, as a young man I read a book that asked this question; if I could do anything in the world, what would it be? Not what can you do to make a living, or what can you afford to do…what would you love to do? I answered, “manufacturing performance-related parts.”

Later, my brother Scott and I put together a blown gas flat-bottom drag boat. From this project, the opportunity presented itself to go into performance manufacturing and I did the craziest thing. I was like, “Hey, I understand blown drag racing engines, let’s start selling gaskets to NHRA Top Fuel teams.” What could go wrong, right?

So, I kid you not, I was at Pomona for the Winternationals the year after we started SCE Gaskets, and I’m sitting in the stands watching these fuel cars going down the track. And I’m thinking, “What the hell did I do? I’m putting gaskets and parts into a bomb that carries with it a lot of liability.”

That’s where we started, at the top of the heap. Actually, now we’ve worked into regular drivers, so we kind of went backwards.

Did you enjoy that challenge?
Though it was daunting, yes, I did. Our job as manufacturers is to solve your problem. If you’re complaining about something, it’s my job to fix it, because you as the customer have the right to request everything: “I want it cheap, I want it fast, I want it now, I want it to work perfect.” “OK.” My job is to supply that. Do I get to make a profit? Absolutely, I get to make a profit if I can meet all your needs and if I do, then I win the contest.

Though our product line now includes much more, early on we did a fairly good job at mainlining copper gaskets. Prior to the mid-1990s, copper head gaskets were a boutique item that only a few people knew about, and fewer knew how to get, for your blown whatever-it-was that you were putting together. We made copper head gaskets readily available to high-end consumers by bringing them into distribution – then created the embossed copper exhaust gasket product category, which we branded as our Pro Copper Exhaust.

I’m always interested in this process, as I look at all the drag racers, they know how to develop parts, they know how to test them.
That’s very true, the “edge-of-the-envelope” nature of our racing customers has forced us to make sealing solutions that are pretty robust. We didn’t start out making gaskets for Briggs & Stratton lawn mowers, we started out making gaskets for Top Fuel dragsters. For example, our partnership with Doug Herbert for many, many years, with all of his crew chiefs, from Jim Brissette to Rob Flynn, Ed McCullough to Dick Lahaie – all of them – we’d work with these guys and say, “Here’s a new raw material. Put it on the pan and see if it lasts.”

What that does to an oil pan gasket is crazy – you know, there’s a fairly substantial bit of weight flopping around on the bottom end – let’s say the pan is two or three pounds, it’s got a windage tray and some oil in it, so it gets pretty heavy. Well, because the main cap forms part of the pan sealing surface on a fuel motor, under power the pan starts vibrating against the main cap trying to beat the gasket right out of it. If the gasket raw material isn’t tough enough, that pounding will vaporize the pan gasket at the rear main and the powers-that-be don’t like oil on the track. For several years we worked to develop a gasket material tough enough to withstand the vibration at the rear main cap of a fuel dragster. If it’ll take that it’ll take anything. It’s a red, steel core material and it’s what we use today for our toughest sealing chores.

So what was next? Didn’t you move your operation out of California?
Yes, we had a lot of manufacturing skills in our Lancaster, California, facility but then in 2011 we were looking to expand our product line further. I was trying to get some information on a new process, so I called up another manufacturer located in Iowa. I said, “Hey, Ron, I hear you can make composite head gaskets and I’d like you to make some for me.” He said, “Sure, I can do that, but do you want to buy my company?” That’s exactly how he answered.

So, I said, “Let me come up and take a look.” That was in June 2011, and by October, we’d bought the assets of the company in Iowa and with it, a ton more gasket manufacturing skillsets came into our wheelhouse. We learned how to make composite head gaskets, we learned about perforated metal core insertion, coating, material combining and more. We also picked up a bunch of new customers.

Starting in California then acquiring the Iowa operation meant that we had two locations, which is logistically tough. We needed to get back under one roof and settled on Tennessee as our ultimate goal. In 2017, we moved the California operation to temporary quarters in Mount Pleasant, Tennessee, about an hour southwest of Nashville. Very soon we’ll complete our new, permanent home, also in Mount Pleasant, which will have us back under one roof permanently.

What’s next for SCE Gaskets?
What next is what’s most exciting. In May 2018, after 18 months of due diligence and research we formed a strategic partnership with the Italian company Athena S.p.A. We had already known Athena for some time because they’re making our MLS head gaskets. The marketplace offered even more opportunities for our two companies to work together, so we began to explore a partnership in late 2016.

Though both parties initially wanted to partner, we proceeded slowly to ensure that our business cultures would align perfectly, and they do. Both companies are family-owned and both cut their teeth on performance.

The partnership of Athena-SCE, Inc. has already brought new gasket technology to market that will dramatically impact all forms of motor racing. We now produce a complete and growing line of multi-layer stainless steel head gaskets; we call them our MLS Spartan. Also, we just introduced another innovative head gasket series called the Vulcan Cut-Ring. These new products and others will continue the SCE Gaskets tradition of offering creative and superior sealing solutions to our customers. The future is bright indeed.